Is Sleeping Beauty or Beast?

Is Sleeping Beauty or Beast? 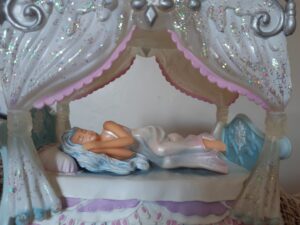 As a sand tray therapist I am always on the lookout for figurines, miniatures and items that can be used by clients to represent their thoughts, feelings, situations, hopes and dreams in the sand tray.  Having a wide range of items is really important to me so that any woman coming to Women’s Time Counselling for sand tray therapy can easily find the representations necessary to process whatever she needs to in the session.

This week we had a new arrival at Women’s Time Counselling in the form of Sleeping Beauty and her bed.  I was really pleased to have sourced her as sleep – and for many the difficulties that come with it – is often brought into counselling.  Sleep is still a mystery to scientists and researchers.  More is known about it than ever but it seems still that no-one knows for sure why we sleep, although it is as essential to our wellbeing as diet and exercise.

How much sleep do we need?

New born babies sleep between 14 and 17 hours throughout each day and according to The National Sleep Foundation www.nationalsleepfoundation.org  in general healthy adults need between 7 and 9 hours of sleep a night although there are exceptions and some people can perform well on 6 hours and others need 10 hours, but essentially on average a third of our lives is spent asleep!  A number of well-known famous characters from past and present are known for sleeping a lot less than the average 8 hours: Donald Trump has been quoted as saying he sleeps no more than 4 hours a night to stay ahead of the competition, Twitter Co-Founder Jack Dorsey sleeps between 4-6 hours, Madonna reported in 2001 that she rarely gets more than 4 hours sleep, Barack Obama less than 6 hours a night, Isaac Newton slept for only 3 or 4 hours a night and became ill from often going without sleep for days, famous psychologist Sigmund Freud slept for 6 hours a night, Mozart slept for only 5 and Florence Nightingale was a light sleeper getting just 4 hours of sleep a night!

Modern Inventions are Having a Negative Impact

Thomas Edison inventor of the light bulb saw more than 5 hours sleep as being “inefficient, unproductive and indulgent” and the lightbulb has certainly had a significant impact on our lives extending the waking day of human beings, often meaning we get less sleep.  We used to rely on the sun as the major source of lighting and our evenings were in relative darkness lit by fire and flame.   Our evenings and increasingly night times too are now lit by artificial lighting and on average we are going to bed and waking-up, up to 2 hours later than we did a generation ago.

Modern inventions continue to impact on our sleep including mobile phones.  Apparently 1 in 8 of us keeps our mobile switched on in our bedrooms often leading to disruption and distraction that impacts the quality of our sleep.  The blue light given off by mobile, iPad, TV and computer screens is beneficial during the day as it boosts our reaction times, attention span and lifts our mood but when it comes to sleep it can have a profound effect on our sleep-wake cycle because it is a powerful suppressant of the hormone melatonin.

Melatonin regulates the sleep-wake cycle which is an internal biological process tied to the natural pattern of day and night.  When our sleep-wake cycle is properly aligned with the earth’s cycle of day and night it promotes restorative sleep and good physical and mental health.  When our internal sleep-cycle is out of alignment with nature we can have difficulty getting off to sleep; wake up during the night; wake up too early in the morning or struggle to wake up early enough.  We may be at greater risk of developing insomnia and of excessive day time exhaustion and our sleep can generally be lighter, fragmented and of a lower-quality.  Researchers at Harvard Medical School carried out an experiment comparing 6.5 hours of exposure to blue light with 6.5 hours of exposure to green light and they found blue light supresses melatonin for twice as long as green light and it shifted internal biological rhythms by twice as much as the green light.

The Impact on Our Health From Loss of Sleep

One in 4 people experiences difficulty with sleep and for most of us sleep deprivation leads to fatigue, exhaustion, difficulty concentrating, has negative impacts on our mood and productivity, as well as slowing down overall mental and physical performance.  Genes that control our immune system and help fight infection are impacted by sleep deprivation.  A UK study by the University of Surrey found that over 700 genes showed changes when deprived of sleep and lowered immunity can lead to dangerous health consequences including an increase in the risk of diabetes, heart disease, obesity and depression and an overall reduction in life expectancy.

We Need Our Beauty Sleep

Although it is unclear exactly why we sleep it is recognised that sleep enables our brains and bodies to rest, recover, repair and re-energise for the next day.  The term ‘sleep hygiene’ is used to describe  the range of steps we can take to help ourselves obtain better quality and more restorative sleep on a regular basis.  These include both changes to our sleeping environment and to our habits and behaviour to help maximise the benefits of sleeping well, such as having a fixed morning alarm regardless of weekends and holidays; restricting day time naps to short early afternoon naps; cutting down on caffeine in the afternoon and evening and having a 30-60 minute of electronic-free time in the lead up to bedtime.  Sleeping on a comfortable supportive mattress, blocking out the light and making sure the temperature of your bedroom isn’t too hot or too cold are all great tips to sleeping better.

The Vulnerability of Sleep

Thinking of Sleeping Beauty will for many bring the Disney fairy tale straight to mind – how Princess Aurora is cursed at her christening by the evil witch Maleficent, who angry at not being invited proclaims that by sunset of her 16th birthday Aurora will prick her finger on a spinning wheel and die.  How the good fairy Merryweather is able to weaken but not destroy the curse and instead of dying Aurora falls into a deep sleep that can only be broken by true loves kiss, and the various twists and turns in the tale that finally see Prince Phillip kiss the sleeping Aurora where she wakes up free of the curse and is swept off to marry the prince and have a lifetime of love and happiness!

This however is not exactly the tale of love and light that it appears to be, despite many of us growing up with this as a heart-warming fairy tale of childhood.  Under UK law kissing someone who is asleep or unconscious is in fact a criminal offence.  There are 4 elements to committing a sexual assault under UK law:

Touching is very widely defined under the Sexual Offences Act and can be through clothing.  The Crown Prosecution Service guidelines state “Touching includes touching amounting to penetration eg: kissing and includes “with any part of the body, or with anything else.”  www.cps.gov.uk

The Beasts That Prowl Around As We Sleep

Digging deeper into the Sleeping Beauty story I have found that the Disney Classic is in fact based on an even darker original tale from 1634 written by an Italian author Giambattista Basile called ‘Sun, Moon & Talia’.  Talia is the daughter of a great lord and she also pricks her finger on a spinning wheel and falls down apparently dead.  Her father cannot bear to bury her so takes her to a house on one of his estates where one day a king out hunting nearby breaks into the house and discovers her laid unconscious in one of the rooms.  Apparently overcome by her beauty and unable to wake her he instead decides to rape her.  He then leaves to return over 9 months later to find she had become pregnant and given birth to twins in her sleep.  The tale twists onwards but essentially Talia wakes up and names her children Sun and Moon and the King and Talia fall in love.  The king is already married and keeps this second family a secret from his wife but one night he speaks out in his sleep and his wife finds out about them.  Her anger at him and attempts to kill Talia, Sun and Moon are later ironically represented in the modern version through the character of Maleficent the wicked witch, rather than the unknowing wife whose husband raped an unconscious stranger and making her pregnant has a secret second family!

Experiencing rape or sexual assault while asleep is surprisingly common although many cannot be sure this is what has happened to them as they were too deeply asleep at the time.  However they later instinctively know something has happened and feel that things aren’t right but are unable to be sure what went on.  This makes it very difficult for victims to feel confident in speaking about what happened to them or being able to report it to the police if they wanted to because they themselves don’t know the details of what was done to them.  Clients speak about finding their clothes have been moved or removed, feeling pain or discomfort, discovering unexplained bruising or for some later down the line finding themselves unknowingly pregnant.

Some clients wake up to find the perpetrator assaulting them and are frozen by terror and cannot move or speak, others may pretend to still be asleep and wait for the danger to pass rather than risk confronting the perpetrator during the attack.  Such terrifying experiences can have deep and long lasting effects on the lives of people who have been subjected to this and for many who are attacked in their sleep the perpetrator is someone they know, care about, love, trust and share their beds with.  Believing you are safely tucked up in bed for the night only to find the person laid next to you exploits your vulnerability, abuses your trust and chooses to carry out the most terrifying and hideous offences often without you even knowing, let alone without your consent, impacts on layer after layer of your life.  What should be an essential and restorative part of life becomes a place of fear, pain, confusion, shame and trauma.

There are so many different aspects to sleep that we will return to this subject again in future blogs to explore among other things: dreaming, nightmares, sleep paralysis and insomnia.

About the Author: Women's Time Counselling